Beauty and The Beast

There are two paintings in the Margaretann Bennett RSW exhibition that I'm surprised haven't sold yet. Okay, predicting what's going to sell is almost impossible, that's one of the things I enjoy, but there are two paintings that have had a lot of admiration and comment from different people, and when that happens, it usually means they will be off to a good home sooner rather than later. 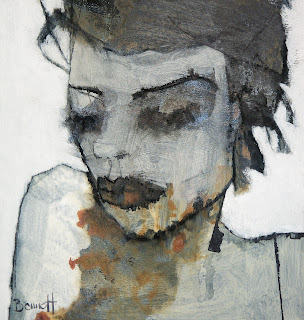 Beauty here is called 'Stung'.  She's wee and demure and very pretty.  She has been admired from the day she arrived in the gallery.  And then there's this wee beastie . . . . 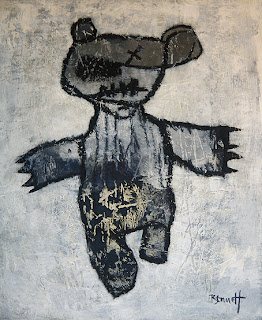 ﻿
He's called 'Hugger', he's wee, he's had a tough time, but anyone can see he just needs a little love and attention!  Sorry I called you a wee beastie Hugger!
I don't often talk to the paintings, but there is something about Margaretann's characters that feel full of life, stories and mischief.  I've enjoyed them for almost four weeks, and have only two more days left with them.
Thanks Margaretann, and well done for such a successful show.  I'll miss them when they're gone!
Thanks for reading!
Natalie
﻿
Posted by SMITHY GALLERY at Friday, November 18, 2011